In the world superbike world planning is well underway for next year, with the FIM and Dorna WSBK Organisation announcing the provisional 2019 calendar overnight for the 2019 MOTUL FIM Superbike World Championship with 13 rounds planned – 12 fully confirmed – and Australia kicking off the show. 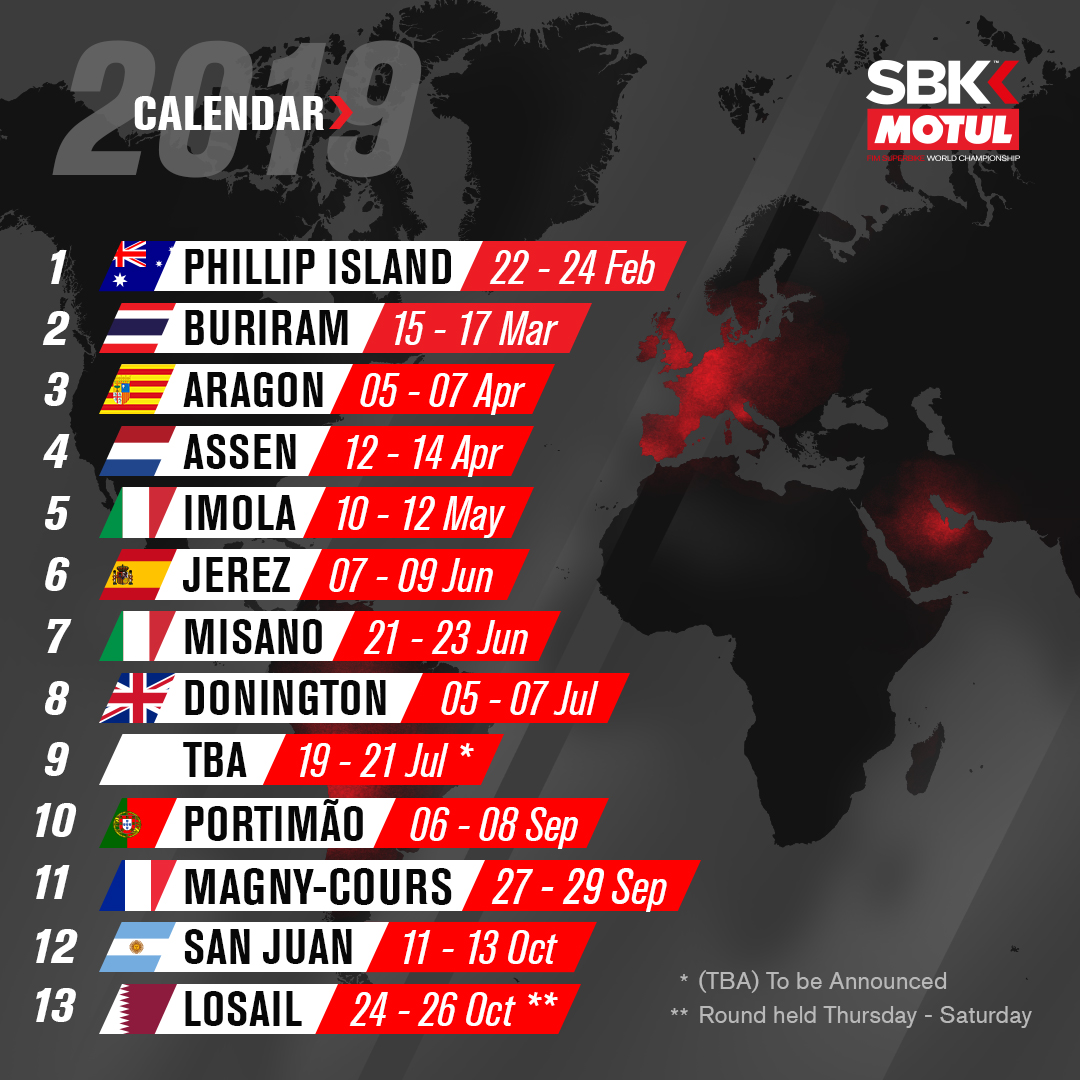 Keen for a hit of summer after a European winter, the WorldSBK fraternity head down under for the season-opener with the Yamaha Finance round at Victoria’s thrilling Phillip Island circuit from 22nd -24th February, preceded by the final two-day test on the 18th – 19th February.

Phillip Island’s round will see the debut of the new three race WorldSBK format, with a sprint Sunday morning dash added to Saturday and Sunday afternoon’s 22-lappers.  Also featured on the agenda will be the opening round of the 2019 World Supersport Championship, and the launch of the national title fights including the Australian Superbike Champs.

From Australia, the circus heads to Asia and round two of the championship to be from 15th – 17th March at Thailand’s Chang International Circuit.

The paddock then returns to Europe on 5th – 7th April at MotorLand Aragon (Spain), welcoming back WorldSSP300 to the racing action with their all new format for the season ahead. The next stop on the 2019 tour will be one week later at TT Circuit Assen (the Netherlands) from 12th – 14thApril, before a short break of racing action.

Round five takes place at Italy’s Autodromo Internazionale Enzo e Dino Ferrari di Imola from 10th – 12th May, before a return to the ever popular Spanish circuit of Jerez from 7th – 9th June.

WorldSBK heads back to Italy from 21st – 23rd June, to Misano World Circuit Marco Simoncelli for round seven, before a change of date for the UK Round at Donington Park to be held 5th – 7th July. After the British adventure, tound nine is set to be announced.

Autodromo Internacional do Algarve will be the now traditional round after the summer break, as the paddock heads to Portugal from 6th – 8th September.

The final European round will be held from 27th – 29th September at Circuit de Nevers Magny-Cours (France), but we won’t be saying goodbye to WorldSSP300 yet.

Circuito San Juan Villicum returns for the second season from 11th – 13th October in Argentina, before all three classes will prepare for the season finale in Qatar at Losail International Circuit. The chequered flag will be waved from 24th – 26th October in the desert, in what is set to be another adrenaline-fueled year of racing action.

See you Trackside at the Island for a Triple-Treat

A three-day General Admission is $120* secured in advance, or $230* when you add camping to your purchase.

If you feel like splashing out, step up to a Bar SBK ticket at $265* (with camping $375*) and enjoy undercover facilities at Doohan Corner, Siberia and Lukey Heights.

World superbikes is FREE** for kids 15 and under, and so is your bike.

As an extra bonus at WorldSBK, all three-day ticket holders are gifted FREE paddock access.

For more information go to www.worldsbk.com.au or call the toll free WorldSBK Hotline 1300 728 007

*All ticket prices quoted purchased in advance and subject to Ticketek service and handling fees.

**Children 15 and under are free and must be accompanied by a paying adult.