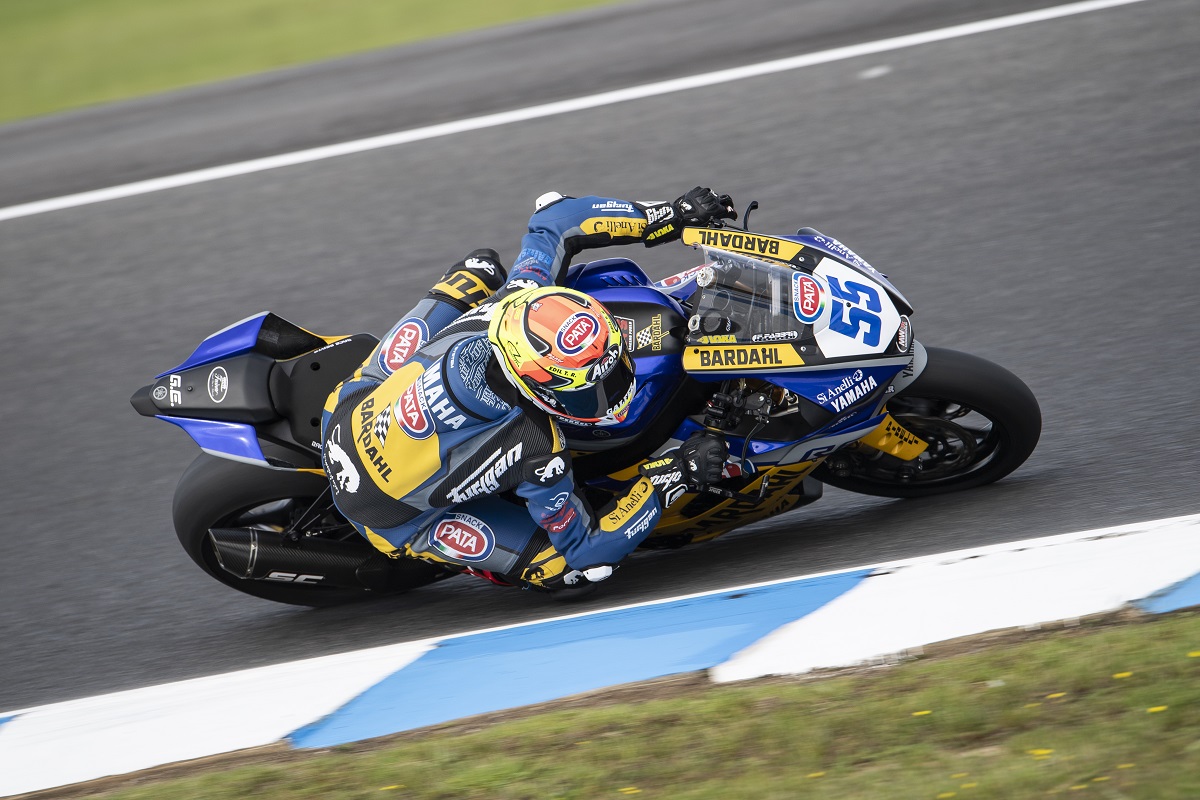 Andrea Locatelli topped the times and left the field to battle for second in his wake.

After a disrupted second session on the opening day of the FIM Supersport World Championship, teams and riders were hoping for a smooth day’s running. Andrea Locatelli (BARDAHL Evan Bros. WorldSSP Team) topped the times on the second day of running having done the same yesterday in a day that was disrupted by several red flags.

Locatelli was the only rider to break into the 1’32 brackets across both sessions as he finished ahead of reigning champion Randy Krummenacher (MV Agusta Reparto Corse) who was second overall, more than half-a-second back from Locatelli. Krummenacher’s day was not without trouble as he suffered from a technical problem with around 30 minutes left to run in the afternoon session, with valuable track time lost as he and the team looked to work on the set-up of the bike.

Krummenacher’s MV Agusta Reparto Corse teammates, Raffaele De Rosa and Federico Fuligni, finished in fourth and 14th respectively. De Rosa’s day also ended early as he had a crash at Turn 9 with around 20 minutes remaining in the afternoon session while Fuligni also suffered from a technical issue during the session – although he was able to return to the pitlane.

Jules Cluzel (GMT94 Yamaha) finished in third place in the combined classification from today’s two sessions after working to find a good balance for his bike in the morning. Cluzel had lots of tyres to use today after not running too much yesterday morning. Cluzel’s GMT94 Yamaha teammate, Corentin Perolari, finished in fifth place despite a trip through the gravel at Turn 2.

Philipp Oettl (Kawasaki Puccetti Racing) was sixth overall, and the fastest Kawasaki rider, just under a second behind pacesetter Locatelli with teammate Lucas Mahias finishing 11th in the combined classification, having been top Kawasaki on day one. Steven Odendaal (EAB Ten Kate Racing) was seventh over the course of the two sessions despite a crash in the morning session at Turn 2. Odendaal’s fastest time came in the opening session of the day despite the incident at Turn 2.

Hikari Okubo (Dynavolt Honda) finished in eighth place with his teammate Patrick Hobelsberger in 18th place, both on Honda CBR600RR bikes. Can Öncü (Turkish Racing Team) was ninth on his Kawasaki ZX-6R with Isaac Vinales (Kallio Racing) completing the top 10 of the session. Vinales was trying some chassis and clutch parts during the test, as well as using the race engine, but with a focus on the whole season and not just the Yamaha Finance Australian Round and at Phillip Island. Vinales’ Kallio Racing teammate Hannes Soomer finished two places below Vinales in 12th place with about a tenth of a second separating the pair.

Manuel Gonzalez (Kawasaki ParkinGO Team) was classified in 17th place, ahead of Hobelsberger, with Andy Verdoia (bLU cRU WorldSSP by MS Racing) one place behind in 18th place and 19th respectively. Australian wildcard Oliver Bayliss (CUBE Racing) finished in 20th place after a focus on testing tyres for today’s session. Bayliss had yesterday gone faster than he had done in the past at Phillip Island Grand Prix Circuit after following some of the full-time riders when they were on the same part of the track. Jamie van Sikkelerus (MPM Routz Racing Team) was 22nd in the classification while Galang Hendra Pratama did not compete in the test following a visa issue.