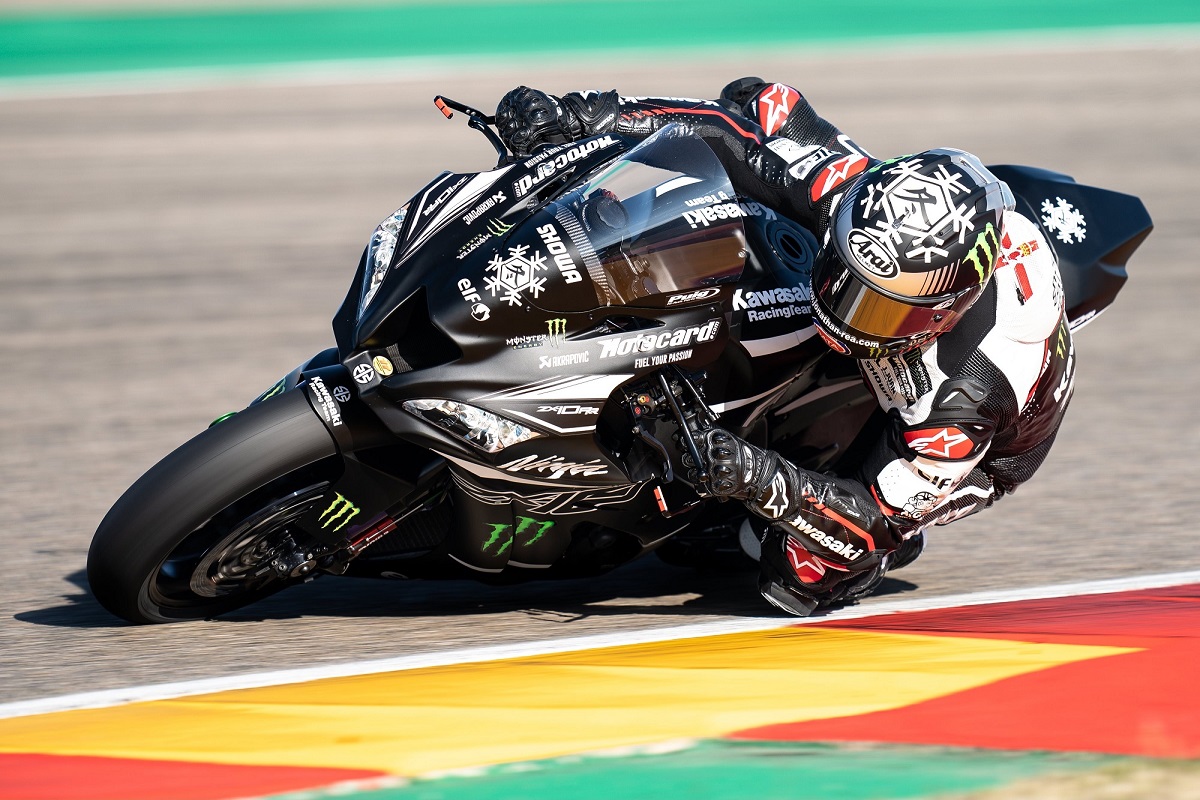 The bike made its track debut at Jerez recently and has now been officially unveiled by the Japanese manufacturer.

After Jonathan Rea (Kawasaki Racing Team WorldSBK) and teammate Alex Lowes got to try the new Kawasaki ZX-10RR for the first time during a two-day test at the Circuito de Jerez – Angel Nieto, Kawasaki has now officially unveiled the new machine that it hopes will continue the manufacturer’s success in the MOTUL FIM Superbike World Championship.

The bike made an immediate impact as Rea topped the times at Jerez with a late run on the second day of testing and now the covers have officially come off the ZX-10RR as Kawasaki unveiled the machine during a presentation. The new bike features a new front fairing to help increase front stability and aerodynamics as well as a new engine with new characteristics as Kawasaki looks to retain the Manufacturers’ Championship.

Aerodynamics are a huge area of development for Kawasaki and the new fairing structure gives the bike approximately 17% more downforce than the current model, while a new seat design helps create a low pressure behind the rider. New footrest designs combined with a 40mm higher screen and new handlebar position have also been incorporated into the new design to help improve the aerodynamic and ergonomic package.

There is also a new engine for the ZX-10RR with gear ratios lowered in first, second and third gears to help take advantage of the power; also improved with a new intake design as well as reduced valve assembly weights although it will still use the rocker arm system for increased power and efficiency.

There have also been changes to the swingarm pivot point, front fork and swingarm length with the aim of increasing both stability and traction, while the springs have also had changes made with harder springs at the front and softer springs at the rear of the bike.

With changes made to the ZX-10RR in order to keep Kawasaki at the head of the field to both the engine and the aerodynamic package, the aim for the Japanese manufacturer will be to look for a seventh consecutive title with Rea. The 2021 WorldSBK season is shaping up to be a sensational season with new line-ups and new bikes up and down the grid.

Three bikes took to the track at MotorLand Aragon for day one of the final test of the season as both Kawasaki Racing Team WorldSBK and OUTDO Kawasaki TPR tested for the final time in 2020, looking to continue learning as much as they can ahead of what is shaping up to be a phenomenal MOTUL FIM Superbike World Championship season in 2021.

The track was open from 10am to 5pm local time (GMT+1) for reigning Champion Jonathan Rea (Kawasaki Racing Team WorldSBK), teammate Alex Lowes and Belgian rider Loris Cresson (OUTDO Kawasaki TPR) as the trio completed the penultimate day of testing of the calendar year at the Alcañiz circuit.

Rea continued where he left off at the previous test in Jerez as he and the team continued to test new items that they hope will add to their success from the last six years, including work on the engine as well as new items. Discussing his day, where he posted a best time of 1’49.716s, Rea said: “It was a positive day because we kept working with the items we had from the Jerez test. We really worked step-by-step on the engine side to really understand all the different feelings I have, all the different parameters we can exploit with the bike and we can draw some really good conclusions.”

“We started work with some chassis items and that list is still growing so what we can’t finish in this test at MotorLand, we’ll take forward to the 2021 pre-season tests. All-in-all, I’m very happy. Lap times are very fast. I feel good on the bike, but I still know the potential is much better because we’re just scratching the surface with the new items.”

Teammate Lowes was also out on track as he looked to build on his race-winning campaign in his first year with KRT, which featured a strong end to the season with two podiums at the penultimate round at Magny-Cours. Lowes reacted to the day, saying:

“It was a pretty good day today. The temperatures in Aragon are a little bit cold so it took a while for the track to warm up so we could get into some proper testing. With a few new parts to try, we wanted to take the opportunity to confirm some of the things we tried that were positive in Jerez. We got a lot done and the couple of things we tried last week worked this week.”

“From my side, we’re really happy because two tracks at different circuits with different temperatures and we have a really good feeling with the bike. It’s been really good. Hopefully it’s dry tomorrow, there’s a couple of things we’d like to try before we go into the Christmas break. The guys have worked really well today, there’s always lots to do at testing especially when you have new parts and fitting them to the bike so thanks to them and hopefully the weather plays ball tomorrow.”

Cresson was also present at the test as he continued to learn WorldSBK machinery following his debut at the season-ending Estoril Round where he raced for OUTDO Kawasaki TPR. Remaining with the team throughout tests at Jerez and MotorLand Aragon, Cresson will continue to test tomorrow, with Rea and Lowes, which is the final day of testing.

Day two of testing was impacted by difficult weather conditions with the weather preventing any running at MotorLand Aragon.

The final day of testing in 2020 ended before it begun with poor weather conditions stopping Jonathan Rea (Kawasaki Racing Team WorldSBK), teammate Alex Lowes and Loris Cresson (OUTDO Kawasaki TPR) taking to the MotorLand Aragon circuit on Thursday. It meant Wednesday’s running was the only running the three riders were able to get across the two-day test.

Both Rea and Lowes were testing new parts after Kawasaki unveiled the new ZX-10RR machine last week at Jerez, with Rea working on the engine yesterday to help ascertain the potential of that component of the machine. There were also items rolled over from Jerez for Lowes who kept the same positive feeling throughout the MotorLand Aragon test as he looks to build on his solid debut season with Kawasaki.

“Unfortunately the weather was not our friend today but we had a good day yesterday, a good couple of days in Jerez last week and we know the areas we are working going into the 2021 season. It’s been a good few tests this side of the season and I’m now looking forward to going home, relaxing a little bit and recharging the batteries for next year.”

It means Rea’s best time of the test was set yesterday on race tyres as he posted a 1’49.716s as the team continued to learn the new machine they hope will continue their success, while Lowes was around one tenth off Rea’s pace as he posted a 1’49.832s. Despite the vastly different conditions between now and when WorldSBK took to MotorLand Aragon for the Aragon and Teruel Rounds, both Rea and Lowes were within a couple of tenths of the race lap record set at the Aragon Round by Rea, a 1’49.620s.

“On day two, we didn’t do any mileage. The weather was full of fog all morning and in the early afternoon. We packed up early, content and satisfied with our winter test programme so far. It’s been really nice to ride so fast after Estoril and our first impressions of the next ZX-10RR are already positive. We’ve been fast and consistent, and the feeling with the bike is improving lap by lap. Looking forward to some downtime at home with my family. All the team, all the staff can go home and relax after a great season.”

Cresson’s rapid rise to WorldSBK throughout 2020 has continued since he made his debut at the Estoril Round and has continued testing with OUTDO Kawasaki TPR ever since including at Estoril, Jerez and now MotorLand Aragon. Cresson had spent most of 2020 competing in WorldSSP but has been riding WorldSBK machinery ever since and as gets acquainted with the machinery. 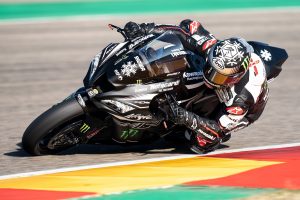 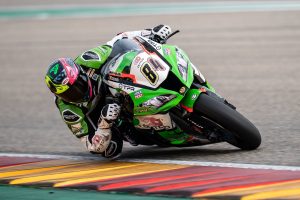 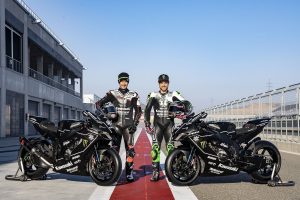 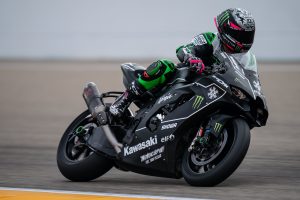 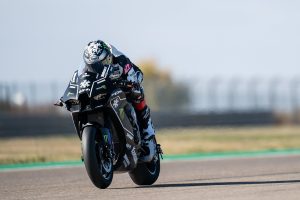